It almost seems as if the only thing stopping the Devil’s Marbles from rolling away are the tufts of deceptively soft-looking sage green grass, and the sporadically placed scrappy-looking little trees.

These massive granite boulders are shaped by time and weathered by the harsh climate of central Australia. They shouldn’t be dismissed as a quirky view through the window of the car.

While you speed along the road between Alice Springs and Tennant Creek in Australia’s Northern Territory, stop and check out what to do at Devil’s Marbles:

1. Wander through the boulders

Meander independently through the Marbles if that’s your style, or follow the information signs on the self-guided walks.

These granite formations have been defying gravity for millions of years. Their variety can only be appreciated by wandering through them. We were amazed… Some of the marbles are the size of a three-story building, while others are just a few centimetres in size!

As time passes, the eroding forces of nature continuously carve out the boulders in this area. No matter how many times you go, there will always be something new and unique to see.

But however you choose to explore these precariously balanced rock formations, give yourself a moment of peace and silence. Allow the cultural echoes from past millennia to guide you through these ever-changing remnants of a bygone era.

2. Sneak in a sunrise or sunset… or both!

The cool clear air of the early morning can only be paired with an incredible sunrise, which is usually between 6 and 7 am, depending on the season.

On the other hand, sunsets tend to be around 6 and 7 pm. They’re the perfect time to rest from a full day of exploration and wind down.

You’ll likely get to enjoy any of them, as rainfall is scarce – February, the height of the wet season, usually has 8 days of rain.

Not taking pictures during these moments is almost impossible, as you can easily catch the sunrise or sunset glaring between the boulders. It doesn’t matter if you don’t have any experience behind the lens – the images you take will be unforgettable!

The show isn’t over, even after the sunset. Roll out a rug and lie on your back – it feels as though you could almost reach out and touch the stars.

There are no street lights or urban sprawl, which thankfully means no light or pollution. It’s just a deep black endless night sky, studded with countless sparkling celestial bodies. If astrophotography is your passion, this is the perfect place to pursue it.

For those who prefer to simply soak up the ambience, just imagine the moonlight reflecting off these mysterious Devil’s Marbles. Their silhouettes are framed by the faint glow of deep space.

The Devil’s Marbles hold a deep spiritual significance for the traditional Aboriginal owners – the Alyawarre, Kaytetye, and Warumungu people.

There are many stories relating to these boulders, but most are sacred and can’t be heard by the uninitiated. The most popular tale is that the Devil’s Marbles are the eggs of the Rainbow Serpent, but this isn’t true.

For the general public, the Alyawarre people tell the following story about the creation of the Devil’s Marbles:

The Devil Man – Arrange -, came from Ayleparrarntenhe. He made a hair belt, an item worn by initiated men, as he travelled through the area. As he did so, he twirled the hair into strings and dropped clusters on the ground.

During Arrange’s return to Ayleparrarntenhe – the twin-peaked hill to the east of the reserve – he spat on the ground. This became the granite boulders that dot the central part of the reserve.

Karlu Karlu, which means “round boulders” in the language of the Warumungu people. Hence the name of the Reserve.

So, once you see the boulders, remember this story shared from the ancient Aboriginal culture. It will give great depth to your experience of Karlu Karlu.

5. Learn the history of the place

The granite boulders of the Karlu Karlu/Devils Marbles Conservation Reserve are also linked to significant events in history:

John Ross, a Scottish explorer, came up with the name “Devil’s marbles”

He lead a team surveying the Overland Telegraph Line in 1870. Once he arrived in this place, he looked out across the surrounding sandstone landscape and said: “This is the Devil’s country; he’s even emptied his bag of marbles around the place!”

A marble was taken from its sacred place to Alice Springs in 1952.

Without permission from the traditional owners, the boulder was removed and placed on the grave of Reverend John Flynn – founder of the Royal Flying Doctor Service – to symbolize all his years working in the outback.

After years of negotiations, it was swapped for a non-sacred boulder chosen by the Arrernte people in 1999. The original is back in its place, while the other sits in what’s now the John Flynn’s Grave Historical Reserve.

Where are the Devil’s Marbles?

To be honest, Kalru Kalru is kind of in the middle of nowhere. You can get there:

To narrow it down, they are 1 hour south of the town of Tennant Creek. The Devil’s Marbles are the perfect overnight stop along the Stuart Highway, one of Australia’s most popular tourist drives.

Related: What to do in Alice Springs?

Where to stay in the Devil’s Marbles?

Where else, but right beneath the boulders? You can stay at the Devil’s Marbles campground site for a front-row seat to the most incredible sunrise or sunset nature can offer. It’s absolutely beautiful and right next to the marbles.

Entry to Karlu Karlu is free, but you have to pay a small cash fee onsite for the scenic bush camping area. If you’re going in peak season during the cooler months, arrive before 4 pm if you can to get a good spot.

There are pit toilets and barbecues, but bring everything you need for a few days at least – there’s nothing else out there! Plus:

For other accommodation options, The Devil’s Marbles Hotel is just 8km south, on the Stuart Highway. They offer cabins, caravans and camping sites.

What to bring to Devil’s Marbles?

If you want to stay overnight in this fascinating geological marvel, prepare for extreme heat during the day with cool nights. These are some of the things we brought:

During the tourist season – especially June through August – it can get quite busy but never crowded. And believe it or not, there is free wi-fi access at the site! Which is greatly appreciated, as there’s no phone coverage.

Now, the drive-in can be long and a bit boring, depending on your starting point. Once there, the flies and the heat are… testing, to say the least. But the experience and the night sky are worth it all.

Also, we can’t emphasise this enough – come prepared with everything you need for a few days at least. There’s nothing else out there, so carefully plan ahead.

On a side note – the area is a Registered Sacred Site, under the care of the traditional owners since 2008. The area is open for everyone 24/7, but they request that people don’t climb the sacred boulders.

The Devil’s Marbles are quite fragile from a geological perspective. They expand a bit during the day due to the intense heat, and the opposite occurs due to the cool nights. Over time, this process weakens them, ultimately breaking some of the boulders in half.

They aren’t just the iconic image of those two precariously balanced “big red boulders” from the postcards. They’re a sacred site for traditional owners, a strategic site throughout European history, a photographer’s delight, and a romantic’s star-gazing dream.

Can you climb the Devil’s Marbles?

You shouldn’t climb the Devil’s Marbles. The local Aboriginal people do ask that visitors respect the area and don’t climb them.

Is it safe to camp at Devil’s Marbles?

Yes, it is safe to camp at the Devil’s Marbles.

Yet, keep in mind that the summer months can be extremely hot at night, as the daytime heat radiates from the rocks. That’s why the cooler months are busier, and understandably a greater security risk.

So, take simple precautions, such as locking up valuables out of sight. All in all, most people do respect their fellow campers.

What type of rock are Devil’s Marbles?

In geological terms, the Devil’s Marbles are formed from igneous granite.

Almost two billion years ago, as magma within the Earth’s crust was cooling, a thick layer of sandstone formed on top of the granite. The sandstone gradually eroded over millions of years, allowing the granite to expand and crack into large blocks.

Once exposed to the elements, natural weathering processes softened the edges. While expansion and contraction caused by extreme heat and cold night temperatures further rounded the blocks into the granite formations of “Marbles” we see defying gravity today. Close your eyes and imagine floating on your back – overhead an impossibly blue sky in a frame of lush green. You can hear the running waterfall water and below is cooling, turquoise water. This place has been sacred to Aboriginal people for thousands of years and it is no wonder why. Does this sound… 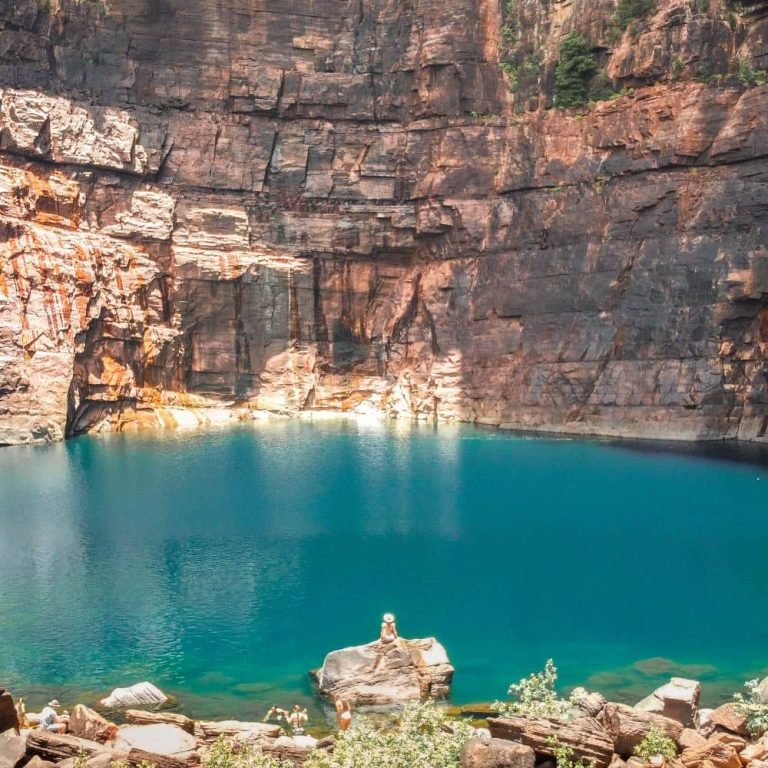 Kakadu is Australia’s largest national park, with over 20,000 square kilometres of beauty and boundless adventures – it’s larger than Fiji! Kakadu is known as a sacred place worldwide, double heritage listed for its cultural and natural landscape alike. There is up to 65,000 years worth of Aboriginal history in Kakadu, which is still strong…

Nature has created the perfect masterpiece… and it’s in centre of Australia. There’s many reasons why Uluru (or Ayers Rock) is a bucket list location, but there’s also a lot of information you need to know before heading to Australia’s outback. To make it easy, we have compiled a list of the 9 most spectacular… 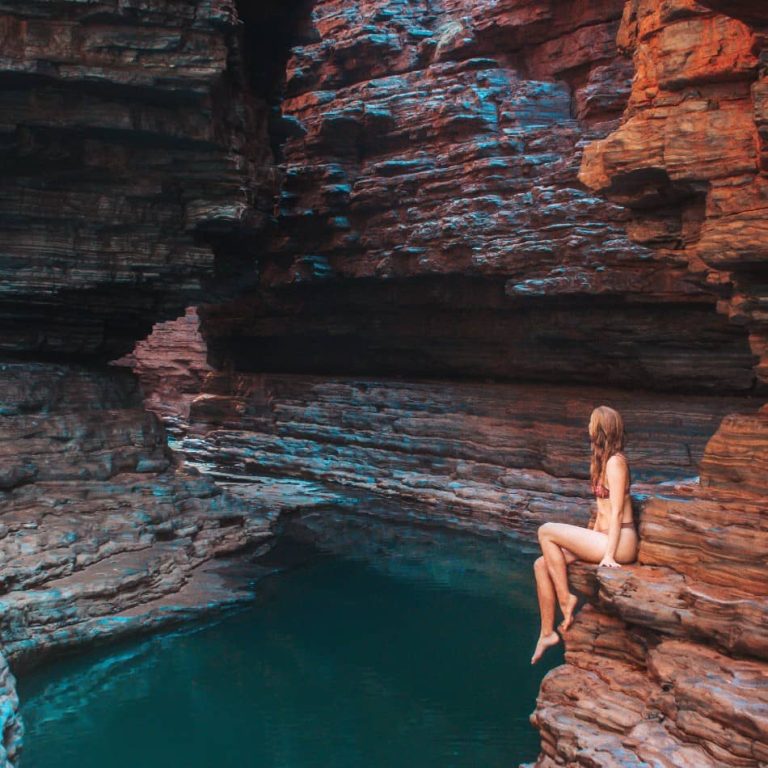 Nothing frees the spirit as much as getting off the beaten track. Escaping civilisation as we know it – hiking, swimming and scrambling into the rugged masterpiece of colour, contrast and utterly awe-inspiring beauty that is Karijini National Park. Karijini, situated in the Hamersley Range of the Pilbara region in Western Australia offers great reward… Of all the gorges on offer in Karijini National Park, Weano Gorge, home of the spectacular Handrail Pool, has to be the most spectacular of them all. There is something otherworldly about this area, with trails leading you down through a geological timeline. Two billion years of history all in a day’s adventure. Like something… 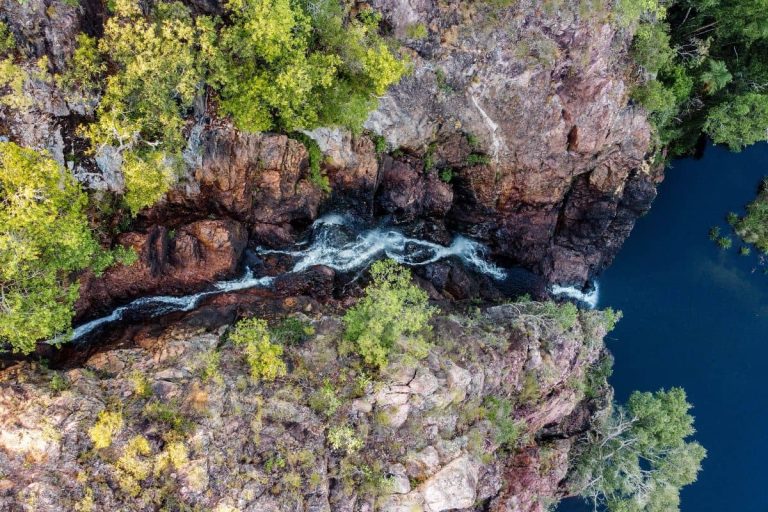 If you splashed a canvas with brilliant blue, emerald green and earthy reds, then you’d have the essence of Litchfield right there… all you’d need to do is lace up your hiking boots and jump into the canvas yourself for an adventure that only Australia’s tropical top end could provide. Marvel at massive magnetic and… 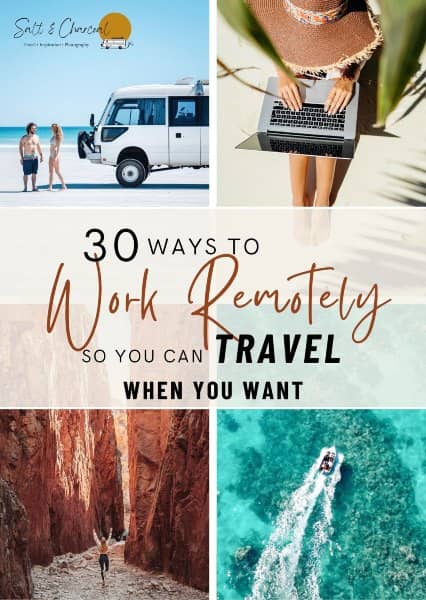